Aurora Borealis crystals are some of the brightest and most colourful of all crystals in jewellery, show costumes, and dance dress, but most people do not know that their history goes back further than they realize. While these crystals appear to have no basis for one colour, when they are turned within light, they shine and shimmer with a myriad of colours. These stone were quite a marvel back in the 1950s.

In the early 1900s, Swarovski had perfected their crystal design. They utilized a mechanical process to cut and polish their crystal stones. These crystals mingled with Paris couture, with both worlds joining together for mutual collaborations. 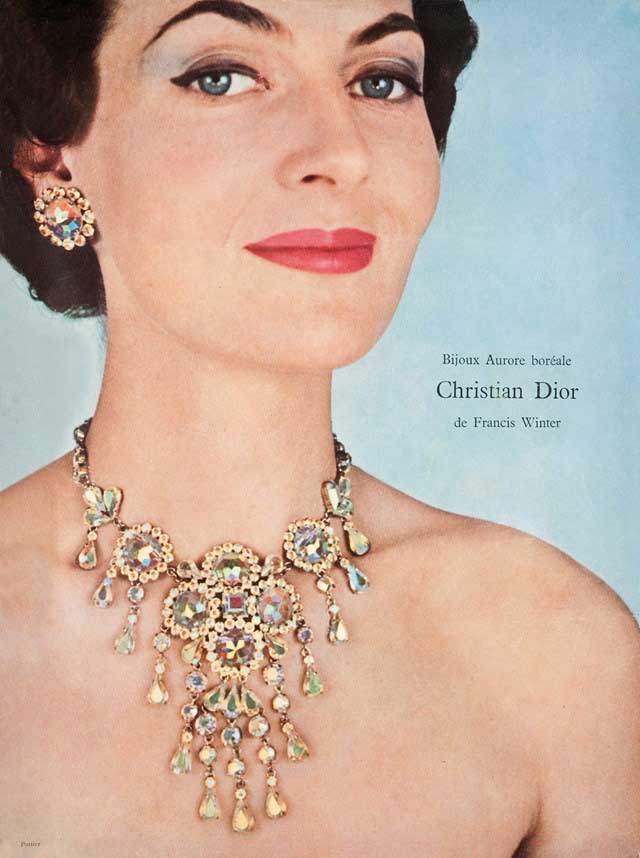 had created an entirely New Look for his designer line of clothing. It was elegant, feminine, and not as regimental as the designs of the war era. He consulted with Manfred Swarovski to find new crystals to complement his outfits. Together, they created special kinds of Aurora Borealis crystals and cut beads. Swarovski created a scientific process to make their crystal stones sparkle with iridescent rainbow colours. Dr. Hm. Schmied led the team. Together they created a blue metallic coating for optical lenses. Manfred realized the benefits of using this same metallic coating on his stones. Manfred did experiments to find the best method of application. He developed a technique to vaporize metal in a vacuum. This application coated the lower facets of each gem with a micro-thin coating of metal. This resulted in the dramatically bright and colourful flashes of colour within the crystals.

In the beginning, it was only the wealthy who could afford Swarovski Aurora Borealis jewellery, made from stones and beads. It eventually became licensed by Corocraft for their Vendome line, making it available to most middle class housewives of the 1950s.
Aurora Borealis is also known by the abbreviation AB. Many bead and crystal manufacturers have copied the process over the past few decades, but the quality never lasts as long, resulting in peeling crystals that soon lose their rainbow flash of colours, and other cheap plastic imitations. AB crystals only lost their lustre through time, but now, they’re making a comeback.
Over time, the Swarovski crystals have been proven to retain their shine, brilliance, and rainbow of colours, and antique AB crystal jewellery is highly desirable.

Swarovski Aurora Borealis crystals are a valuable component of costume design, whether it’s a beautiful gown, dress, body suit, or jewellery. Swarovski Aurora Borealis crystals are experiencing a resurgence in popularity, as our technological age can appreciate these beautiful crystals. Even today, Swarovski keeps their AB processes closely guarded, and requires the highest quality production of its crystal line.

THE ONE is a glamorous historical revue that is taking place from 22nd of September 2016 in Friedrichstadt-Palast theatre in Berlin, Germany. Many have named it the “Biggest Show in the World!” This show features a journey through time, and is noted for having its stage costumes designed by world-renowned costume designer Jean Paul Gaultier. This show is called, “THE ONE” for being one of the grandest shows in the world today.

The grand show of THE ONE is reminiscent of the biggest Las Vegas shows, complete with music, performers, guests, intricate sets, a theme, and glamours stage costumes. THE ONE features over 500 different glamorous costume designs that have taken several months to create. The show’s theme is a glimpse of a theatre’s past, to find the one who means everything to us. In many of the costume designs that Jean Paul Gaultier has designed, we can see hundreds of beautifully sparkling crystals. Some of the more stunning stage costumes are encrusted with clear white or colourful crystals, flowing fabrics, feathers, and more. Every costume in the show have been designed by Jean Paul Gaultier. This show is more of a revue, which doesn’t feature a long intricate storyline, instead being a series of entertaining vignettes, which may serve one purpose.

The show is actually centred around a former theatre, and how one little boy makes it come alive again. The resplendent costume designs help to bring the theatre to life, and attract new audience goers to its renewed cause. The revue show features a former theatre director who sees the possibilities of the future. He sees the past through his thoughts. Past and present come together in one giant show. While these events are taking place, he is aware that he is in search of that one person who will mean everything to him, THE ONE. The revue features dancers, music, and performers. The costumes are extravagant, even if each only features for a two minute curtain dance, or parade. Parisian haute couture comes alive on the Berlin stage. Even the light design has been created by Peter Morse, an Emmy Award winner, to bring the thousands of Swarovski crystals to light. These 500 costumes are worn by over 100 artists on the stage. This show took a budget of eleven million euros, making it the most lavish show in Europe.

Jean Paul Gaultier was also responsible for working with Swarovski to design Kaputt Swarovski crystals. These crystals were unveiled at his Spring/Summer 2015 Haute Couture collection. These crystals feature a special cut, and many are of varying shapes and designs, with holes to make it easier to sew onto costumes and outfits. He was also instrumental in designing the Scarabaeus green crystals for Swarovski. But these crystals display more than flashes of green, they are oval bead-shaped and display a variety of aurora colours that are displayed in flashes and turns, from orange, red, to pink and gold. Get Scarabaeus Green in our webshop available in flat back HotFix & NonHotfix!
THE ONE could become the biggest show in the world, so get your tickets NOW: Palast Berlin The One Tickets

Costume Design Plans is “The One” stage costume company that gives you from costume designing until the final costume creation. All in one made by professional Showbiz team.