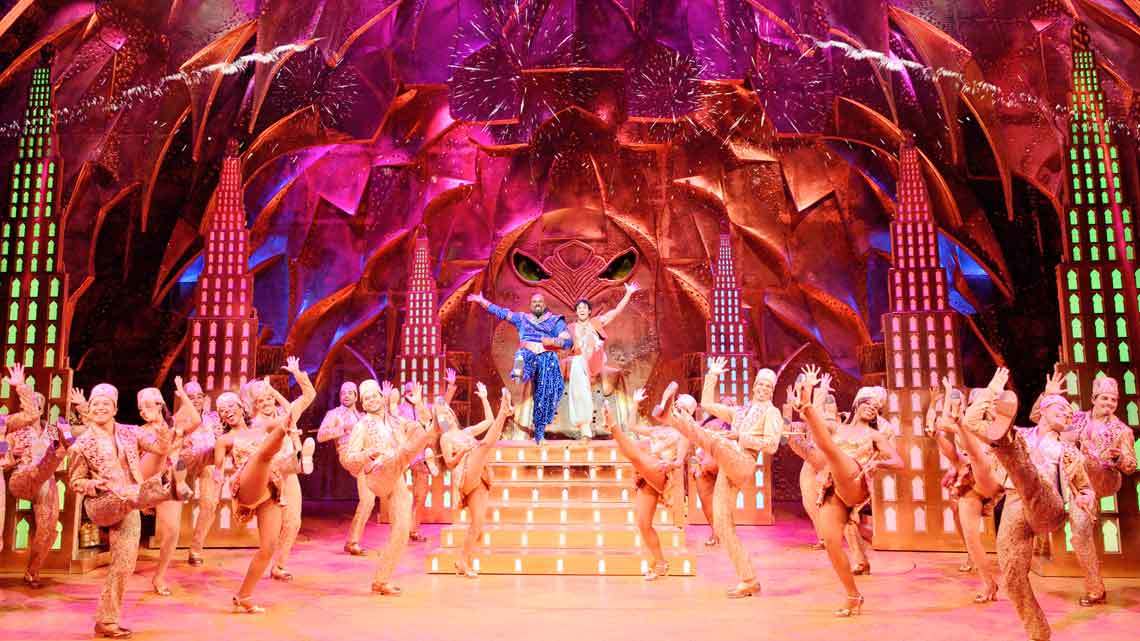 Aladdin is one of the best loved fairy tales, and Disney has brought it to life in books, film, and now with a musical performance that began in Broadway, then moved across the pond to the UK. Their performance of Aladdin has involved some intricately designed costumes that are brightly coloured, beautiful, and encrusted with over two million Swarovski crystals at last count.

Apparently this has been the first musical production that has ever utilized over 2 million individual crystals. A great number of hours has gone into designing these costumes and creating them for the stage.This stage production’s costumes for Aladdin has fallen under the responsibility of costume designer Gregg Barnes. He has been the one responsible for dreaming up “A Whole New World” of intricate and magical costumes. (A Whole New World is one of the hit songs of the stage production.) Gregg Barnes had to start at the beginning for his costume design. While he had books and films to reference, he wanted to create special costumes for the musical theatre production of Aladdin that stood apart from the others. You may have noticed how his costumes are brighter, shinier, and sparklier than anything you’ve seen before. When people purchase their theatre tickets, they’re expecting more than an entertaining show, they’re going for the wonder of it all. This means that not only must the stage settings wow the audience, but the costumes as well. Barnes also wanted a cohesive theme to carry throughout the show. What better way to do that then through sparkling crystals. He felt that the theatre show was a lot different than anything that has come before. You can’t have simply one or two costumes with crystals—the entire production must sparkle and dazzle and audience.

Barnes decided to take a look at shows such as Dancing With the Stars, belly dancer costumes, musicals, and Middle Eastern garments for costume inspiration. He has certainly succeeded in creating his unique vision of the show, yet still holding to the traditional imaginings of the Aladdin theme too. It took over 32 workshops to create the beautiful clothes seen in Aladdin. The Swarovski jewels have been sewn among beading, making the costume production tasks take doubly longer. These crystals were sewn into fabric that was sourced from many different countries, including China, France, India, Morocco, and Japan. 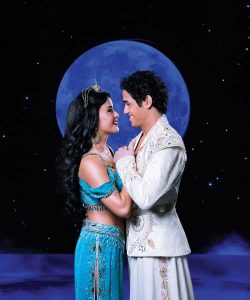 Many of the costumes also utilize modern construction techniques, such as laser cut leather, silicone moulding, and subliminal dye work. And even though the clothes look shimmery and light, they must withstand the hours of time on stage. On average the team had eight shows a week to do. That’s a lot of wardrobe changes that the Swarovski-encrusted clothing must withstand. The construction must be well-made, with each article of clothing requiring an inner layer too.

The costumes began by being cut into pattern pieces, painted, and then the Swarovski crystals applied. Then the pieces were returned to the dressmaker for final construction. The costumes still look as bright and sparkling during their first show in the UK as they did during their first opening show on Broadway.
Let your costume made by Costume Design Plans Team, and for sure it will be fabulous and sparkling with Swarovski crystals like a fairy tale! 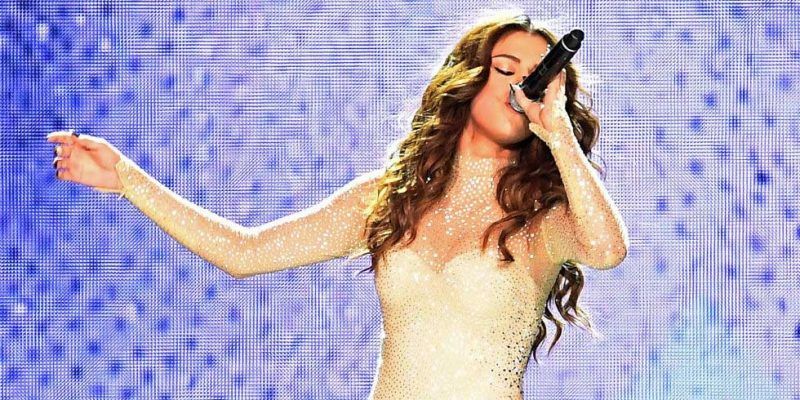 It can be quite an achievement to figure out how to make a world-renowned musical celebrity wear mostly sparkling Swarovski crystals and not much else. In Selena Gomez’s recent Revival Tour she not only debuted a new song, but also a bright and sparkling costume that featured over 100.000 Swarovski crystals. This costume featured a light golden coloured body-encasing bodysuit that covered her torso, but left her arms, legs, and neckline shimmering with the thousands of tiny sparkling gems.

Selena wore matching light gold boots to match the costume. This was the costume she wore during the opening number of her show, and she certainly wowed and stunned the audience. Her catsuit was completely covered with the clear colourless crystals, and apparently the official crystal count was 96.480, as apparently the designers were counting. Swarovski has created some of the best crystals for costumes, ensuring that the crystals are durable, sparkle as much as a diamond, and that they last a long time, as costumes often become part of museums or personal collections.

Selena Gomez’s costume was designed by the New York label Monse and involved a collaboration between the Austrian Swarovski company and the design label.

Surprisingly, there are actually two Swarovski-encrusted costumes on Selena’s musical tour. Every second night she wears a black version of the golden-nude one. She alternates her costumes each night of her tour. For those lucky attendees who have more than one night of tickets to her shows, they’ll get to see her in both spectacular versions of the costumes.

Her opening act begins with a costume transformation. She enters the stage wearing a full-length gown, morphs into cocktail length being short in front and long in the back, and then she discards her gown completely to reveal the black or the golden catsuit beneath. During the transformation she keeps her face veiled with black netting, before discarding this during her final transformation.

Monse is a new clothing brand that was created by Laura Kim and Fernando Garcia. Both have previously worked for Oscar de la Renta. They presented their first collection this Spring 2016. They also work for Carolina Herrera in full-time positions, but still manage time to run their own line. The Monse line has earned some CFDA and International Woolmark Prize nominations. Sarah Jessica Parker has been seen wearing the Monse clothing during the Met Gala, and she supports their line fully. Selena Gomez’s introductory performance look is called “Runway/Masquerade”. Other designers were invited to create looks for her other portions of the show.

Selena Gomez’s Swarovski catsuits are sure to be destined for the costume museums’ ranks, through not only their sparkling ingenuity, but for the sheer number of hours that must have gone into constructing the black and the golden nude catsuits. These are costumes that have been designed for Selena Gomez alone, and are so form-fitting that they’ll be retired with honours after her Revival Tour has been completed.
You would like to have a unique costume made with Swarovski Crystals? You would like to shine on the Stage like a Pop Star! Just contact us and we would be glad to create your dream costume!!!

Cirque du Soleil has some of the most unique costumes in the theatre circuit, so when they collaborate with the Swarovski crystal company in costume sewing and design, you know there are going to be some amazing costume creations. Every Cirque du Soleil show has continued to amaze and charm audiences. These are stage productions that encompass smaller stages, often done under tents or smaller Las Vegas venues. A show has little dialogue, choosing to show rather than tell the story. And this is why a collaboration with Swarovski has been so exciting.

Many people know that Swarovski has a line of beautiful clear colourless crystals yet they forget that their crystal line also has bright colourful gems too. If you picture a Cirque du Soleil show, most people think of unusual and yet colourful costumes. Swarovski crystals were used for one of the costumes worn during the showing of Amaluna. This was a white dress worn during the Peacock Dance. This dress comprised two pieces, a bustier and a skirt. The bustier was made from a stretch nylon tulle to enable the dancer to move fluidly. The bustier was encrusted with white beaded lace that was covered in Swarovski crystals. The dress itself was made of nearly sixty metres of white non-stretch nylon tulle. The dress was constructed with a tail made from sun ray pleats and white peacock feather designs. This skirt was also covered in white lace and was covered in Swarovski crystals. The combined dress alone was covered in over 6500 Swarovski crystals.

the male performer. Crystals were then attached in amazing patterns, much like resembling tattoos on the body. When the acrobat performed in his costume, the crystals would shine and sparkle in the light as he turned and rotated. For such a simple costume, it certainly stunned the eyes.

Swarovski has even been helping costume design students in the creation of costume designs. At École supérieure de mode (ESM) students were given the opportunity to redesign popular costumes from the Cirque du Soleil shows. Swarovski believes in supporting emerging fashion talents. Teams were formed, and they transformed past Cirque du Soleil costumers into new designs by using fabric and crystals together. Their aim was to reuse garments for sustainable living and to transform old materials into new forms.

Students made purses and bags from the old costumes. One notable design was a lot like a kaleidoscope from childhood, which is one of the notable themes that could come from a Cirque du Soleil show. The Swarovski company was impressed by the talents discovered from the ESM school.

Swarovski continues to enforce their commitment to sustainability through creativity and education. It will be exciting to see what other types of Cirque du Soleil collaborations they have throughout the remainder of 2016. Let your costume made also with Swarovski crystals!
Get in touch with us and we will design and create your perfect Swarovski Costume!!