The 2016 Rio Summer Olympics may have come to an end, but the memories of the beautiful leotards that the athletes worn continues to live on. Of note are the leotards that the US gymnasts wore, and the water ballet dresses worn by the synchronized swimmers.
The US women’s gymnastics team consisted of five young women. For their national team coordinator, Martha Karolyi, she felt that the right outfit would lend confidence to their performance. While the gymnasts had many changes of outfits during the Olympics, one set of leotards that stood out consisted of red, white, and blue fabric, with thousands of glittering Swarovski gems sewn onto the surface.The notable outfits had a red bodice with blue base, and a stripe of red along the neckline and waistline. The bodices of the suits were encrusted with thousands of small Swarovski crystals. Their coordinator has called competition leotards “little prom dresses”. She felt that a great look coupled with good routine preparation would give them good feelings on the competition floor. 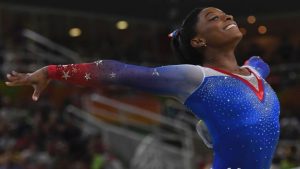 The leotards started out being patriotic, and then evolved into a much fancier design. These leotards were created by GK Elite Sportswear. Apparently as the suits were being made, Karolyi kept on saying, more sparkle, more sparkle. Each of the gymnasts had received a total of twenty leotards. Twelve were strictly for training, and eight were for competition, and presumably each were encrusted with crystals. Each of these Rio leotards has about 5000 Swarovski crystals on them. In the stores, a similar leotard would cost the gymnast about $1200. The official outfitter of the US women’s team said that “We may have hit peak crystal”, acknowledging that there was no way to sew even more crystals onto the outfits.
While we didn’t get to see all their leotards, we do know that there was another version with pure red fabric, long sleeves, and sparkling swirls of Swarovski crystal designs over the surface. 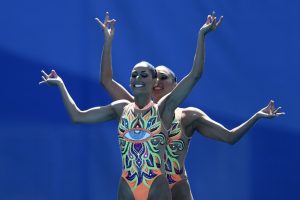 The synchronized swimmers also wore swim dresses that were encrusted with Swarovski crystals. This is a water ballet type of event set to music, and is done in teams that coordinate a routine together. Some notable swim dresses were sleeveless, with large black stars against a golden background, and encrusted with jewels.

Using Swarovski crystals on leotards is apparently becoming trendy. Nastia Liukin won a Beijing gold title while wearing an outfit that was adorned with 184 crystals. Douglas won a London title with a leotard that had 1188 crystals sewn on it. Apparently all the performers agree that the outfit creates part of that look good, feel good, do good aspect of the best competition. Apparently what you wear can matter like in showbiz.

Despite the extra weight of the crystals, they aren’t heavy enough to impact performance. But Swarovski have a new type of crystal called the Concise Crystal. This gem is half the weight of the current crystals and it’s already available in hotfix in three different sizes and eight different colors. Get the Concise crystals from CDP! Just contact our Swarovski consultant: kristina@costumedesignplans.com

Since there were thousands of shining stars in the Rio Summer Olympics this summer, it will be exciting to see if the leotard designers can sew on even more crystals for the next summer Olympics in Tokyo, Japan in 2020.

When we hear the name Rockettes we think of the famous dancing company from early last century. Not just any dancer gets accepted into the Rockettes—one must have exceptional pose and balance, and fluidly follow the movements of the other dancers, so all appear to move as one. The great costume and dress designs are also another great reason to buy a ticket. The Rockettes are a famous dance company that was founded in 1925, and have been performing at the Radio City Music Hall in New York City since 1932. Each year, 500 women audition for the chance to be a star. This year’s show promises to dazzle and amaze with it’s “New York Spectacular” theme, with a variety of glittering and sparkling costumes made with crystals.

The story begins with three children becoming separated from their parents while on a trip to New York. New York’s most iconic sites come alive for them. The summer Rockettes wear unforgettable costumes, while dancing to a great soundtrack of classics, pop hits, and new compositions. In one number, the dancers are wearing black suits with long sleeved jackets and shorts, with large sparkling polka dots lit up with LED lights. Their black hats are also adorned with sparkles. In another set, the dancers are wearing 1920s-style flapper dance dresses in shimmery silver sparkles. As the dancers whirl, the fringe on their dresses moves with them, presenting a flashy and sparkly display.

One of their sets called “Singin’ in the Rain” has the Rockettes performing in bright yellow raincoats with pink ruffles, and matching gumboots. Each Rockette dances with an open umbrella in hand that resembles a giant pink blossomed flower. The show even involves actual “rain”.
The show takes the kids through a variety of famous landmarks in New York: Grand Central Terminal, the Metropolitan Museum of Art, Wall Street, Central Park, and more. It’s a reworking of last year’s Rockettes Spring Spectacular, but with some differences to attract revisits from their loyal audience.

The Rockettes were choreographed by Mia Michaels from So You Think You Can Dance. The show was written by Douglas Carter Beane and the costumes were designed by Emilio Sosa. Emilio is also known as Esosa, and he’s been nominated for many awards for his costume sewing designs, and has been on Project Runway, and designed for many other Broadway shows. He also worked on the costumes for last spring’s New York Spectacular. In the past, the Rockettes’ costumes have been known to be adorned with Swarovski crystals, some of the best and most glittering faux gems. During their 2012 show, one of their costumes had over 3000 Swarovski crystals on it. The Rockettes’ New York Spectacular is a glittery pageant, full of music, dance, sets, costume and dress designs. With so much to see, don’t expect a lot of story line at one of their —it’s mostly visual—but go for the enjoyment of a world-class show full of amazing dancers and incredible costumes.